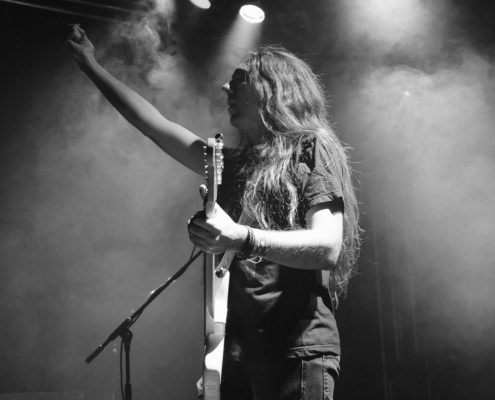 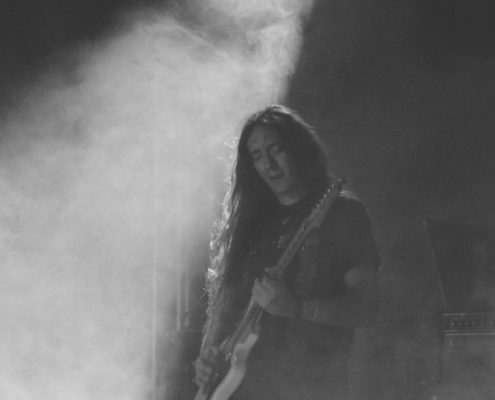 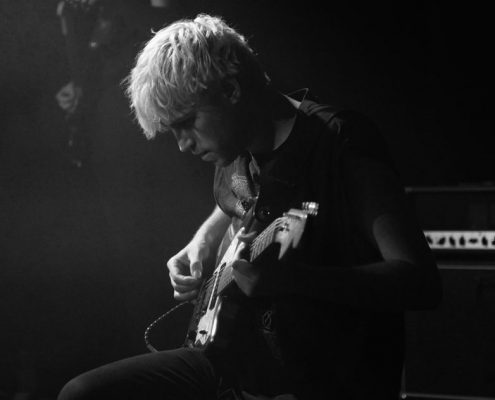 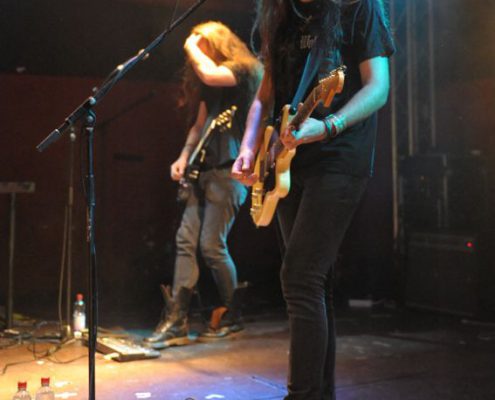 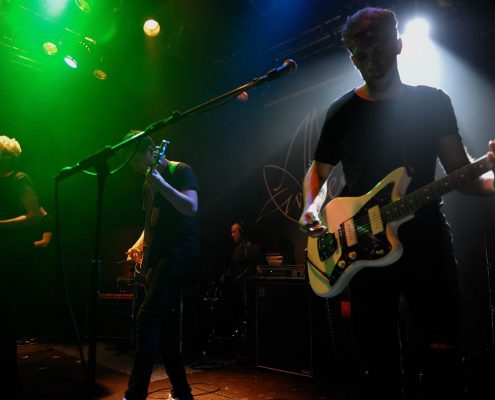 With “Shelter“ French post-rockers ALCEST released one of the best records of 2014. The complete abandon of their black metal roots did not harm the dreamy soundscapes, which fans grew to love. German support band LANTLÔS did an even better job with “Melting Sun“, which also abandoned the post-black metal sound of their first three records, that also features ALCEST‘s singer/guitarist Neige on vocals. Both bands share the same sound aesthetics and also shared a past, so it is no surprise to see both bands on one tour.

LANTLÔS open their set with ‘Bliss‘, taken from their third record “Agape“. The harsh sound blending post-metal with black metal might surprise fans of their most recent record. At least it surprised me last year, when I saw the German band in Oberhausen in front of far less people that today. Three “Melting Sun“ tracks are the middle and main act of the band‘s set. Even though some might think that the contrast between the band‘s old stuff and the new post-rock-sound could be too sharp, but it works out perfectly fine: Live the groups‘s songs sound much harsher.

The performance is quite static, but that doesn‘t matter, because the songs need the audience‘s attention. Due to the clear sound you can point out all the details within the songs. Some even occurred while listening to the record. The set is finished by two tracks taken from “.neon“: ‘Pulse/Surreal‘ and the band‘s probably best song, ‘Coma‘. Last year I was thrilled, when I first heard the song at their show. Of course this time I am prepared, but back then this song blew me away. This tune ends a great show by one of Germany‘s most interesting bands. If you haven‘t: Check ‘em out!

After a break ALCEST hit the stage. Their setup is kind of uncommon: the drum kit is positioned in the right corner and in the middle, when usually the drums are placed, is Neige‘s amp. ‘Opale‘, the lead single of their most recent output “Shelter“, opens the band‘s set. The sound is as good as the support‘s, but Neige‘s vocals are a bit too quiet during the first song.

The band plays a good mixture of their four records: three songs taken from each of their last three records, two tracks from their debut “Souvenirs D’un Autre Monde“, but none of their black metal ep “Le Secret“. For those who want to hear some of the heavier spectrum of ALCEST at least ‘Percées de lumière‘ should be a treat. Even if you don‘t like the black metal side of the French band, you still should consider this as one of ALCEST‘s best tracks.

The encore consists of ‘Autre Temps‘ and ‘Deliverance‘. After a 90 minute show ALCEST leave the stage. Even though the whole evening there was no real performance or other actions on stage, it was an evening of great music, which surely didn‘t need any outrageous performances. Even though ALCEST did a great show, I think LANTLÔS might have managed to top that.