Bring Me The Horizon with PVRIS in Cologne

Bring Me The Horizon with PVRIS 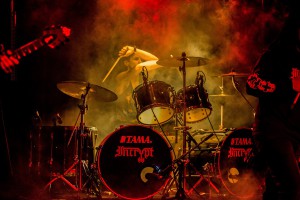 A few years ago many though that BRING ME THE HORIZON would not last very long. They‘d be gone by the time that the colourful Drop Dead shirts weren‘t scene enough anymore. That was back in 2007 when the band released its debut, “Count Your Blessings“. But with every record BRING ME THE HORIZON grew bigger and bigger – even though there was a small time during the second leg of the “Suicide Season“ tour, when it looked like the support bands A DAY TO REMEMBER and AUGUST BURNS RED were more in the fans‘ favour.

By now BRING ME THE HORIZON are the biggest band in metalcore, selling out huge venues all over the world, “Sempiternal“ was certified gold in the UK and their most recent record “That‘s The Spirit“ could peak at number 2 in the UK and US (in the USA it even was the most selling album by sales). It is no surprise that all but two shows of their Europe and UK tour is sold out. The 4000 tickets for their show at Cologne‘s Palladium also sold out weeks prior to the show.

Unfortunately I miss the first band BEARTOOT due to traffic and the search for a parking lot. I saw them last year opening for OF MICE AND MEN and I have to admit that I was looking forward to watch them play again. So the first band of the evening is PVRIS (pronounced as „Paris“). The electro indie rock band fronted by Lynn Gunn, the sister of ISSUES‘ singer Tyler Ward, seems to be well known among the audience. ‘White Noise‘ opens the band‘s set. From the very beginning the crowd is willing to jump or do whatever frontwoman Lynn wants them to do. It is quite obvious that the trio (accompanied by two musicians) are having one hell of a good time. Their biggest song, ‘My House‘, ends their far too short set, consisting of only six songs. They should have played at least one more.

Then BRING ME THE HORIZON enter the stage. To be honest, it is nice that the whole band gets a warm welcome applause and not only singer Oliver Sykes like a few years ago. The stage is quite dark and is only lightened by the video wall behind the musicians. ‘Doomed‘, the opener of the Brits‘ new record “That‘s The Spirit“. The sound is clear and perfect, the video animations are an eyecatcher and Sykes‘ voice actually sounds alright. But he needs some held by keyboarder Joran Fish, samples or sing-alongs of the crowd. It is also obvious that his performance is more focused. Sykes isn‘t running around, does not jump all the time or headbangs, most of the time he stand close to his microphone stand and concentrates on his vocal duties. It is only during ‘Chelsea Smile‘, taken from the band‘s 2008 outfit “Suicide Season“, where he lets go and seems like the Oli Sykes people saw on stage three or four years ago. But that‘s totally okay, because the musical direction that BRING ME THE HORIZON took would not allow such a performance.

The setlist consists mostly of songs taken from the group‘s last two records and mentioned ‘Chelsea Smile‘, that seems to be new or at least kind of unfamiliar to most of the crowd. Back in the day it was a song that heated up every moshpit. Today this song is ‘Antivist‘. Especially new anthems like ‘Throne‘ or ‘True Friends‘ seem to be among the fans‘s favourites.

BRING ME THE HORIZON bring their great show to a fantastic end with ‘Drown‘, clearly the best song Sykes and co ever wrote. The 70 minutes show was great. I don‘t know if the old shows were better, because they were far to different from today. I like it both ways, to be honest.