Exodus with Dew-Scented and Arcania in Essen, Turock am 17. Juni 2015 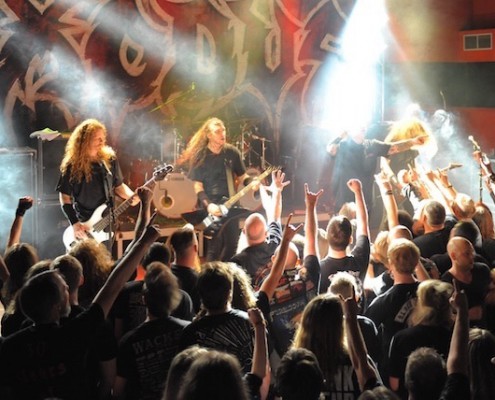 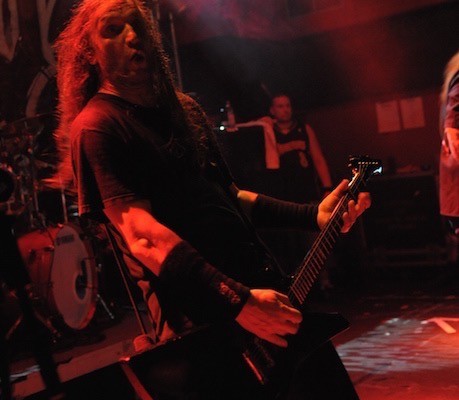 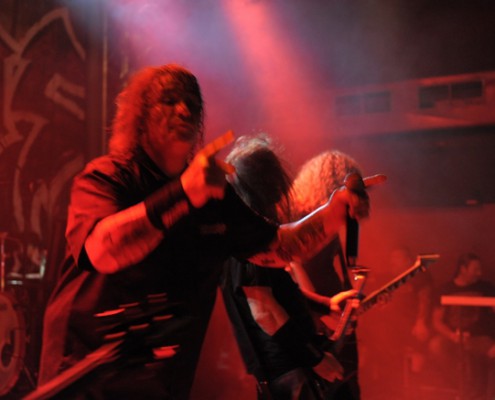 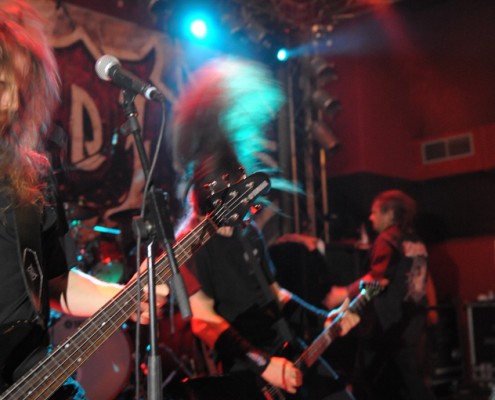 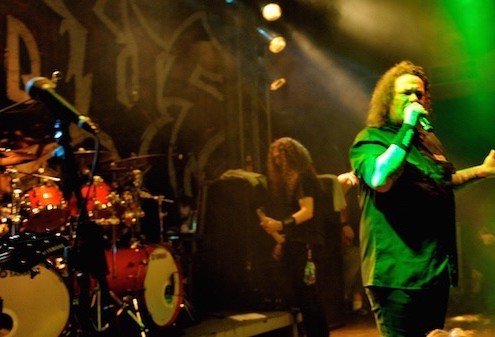 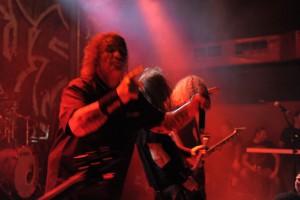 I missed EXODUS at the Rock im Revier festival two weeks prior to their headline show in Essen. I guess this is the better deal: instead of a 40 minutes set in a oversized arena and a bored crowd, I get to see the thrash titans in a small club in front of loving fans.

First band of the evening are French thrash-newcomers ARCANIA. The four-piece is not very famous by now, obviously. Only three fans are right in front of the stage banging their heads like crazy. The rest of the small audience is not having a bad time either. The band is just too young and too small to be known well. The show of the four guys isn‘t very spectacular. In case the musicians look like they‘re nailed to the ground – at least that could be suggested by the radius of their movement. Nevertheless the modern and melodic thrash of this French band is good and I am sure that they will gain many new fans on their run with EXODUS.

German thrashers DEW-SCENTED gained a moderate following across their almost two decades long career. Even though their music is kind does not develop at all! The band has its sound and does not leave its musical path. This means that the next forty consist of thrash is its most aggressive, yet modern form. This is absolutely nothing I would buy and listen at home, but due to the sympathetic nature of the band the show is at least enjoyable. The group‘s fans do have a good time. The five Germans put on a solid show, nothing more, nothing less.

But everybody can learn how to put on a good thrash show by watching EXODUS. Right from the first beats of the ‘Black 13‘ intro the band‘s fans go crazy. The sound in the venue is good, the mood among the thrashers is great and the musicians have a good time as well.

Exodus with Dew-Scented and Arcania

Even though Gary Holt is missing because of his duties with SLAYER, EXODUS are a strong live band. Guitar player Lee Altus uses this chance to be in the spotlight. He knows every pose and is very close to the fans. But most of the time all eyes are on returned vocalist Steve ‘Zetro‘ Souza. Souza‘s voice sounds great and even better than on record a few years ago. EXODUS know how to deliver some good friendly violent fun. The setlist contains a good mix of the band‘s first three classic records “Bonded By Blood“, “Pleasures of the Flesh“ and “Fabulous Disaster“, but also tunes from the band‘s reunion-LP “Tempo of the Damned“ (‘Blacklist‘ is one hell of a groovy song!) and of course their most recent reunion-album “Blood In Blood Out“. I am surprised that Zetro even sings some songs from the records he did not sing on.

The two hour set ends with ‘Toxic Waltz‘ and ‘Strike of the Beast‘. I‘ve heard before that the thrash titans might play up to two hours and I was afraid if that might be a far too long set for any thrash metal band. But EXODUS proved that these two hours were pure fun and far from boring. Great show!